Fire pit skulls might not be a part of your everyday decor, but there is no doubt that they will be the center of conservation around Halloween time. Add some imitation skulls to your fire pit or fireplace to create a spooky and realistic holiday atmosphere.

Most fire pit skulls are made out of a fireproof material. This allows them to be used year after year without being destroyed by the flames. They often can be used in both gas or wood fire pits or fireplaces.

The below video shows an example of how the skulls might look in a gas fireplace. Keep in mind that these skulls are hollow, which allows the flames to come through the holes. Be aware that some skulls are not hollow,  therefore they will not allow the flames to reach the interior.

Below we have compiled our picks for the best fire pit skulls. There is no doubt that these will be a major hit at your next Halloween party. 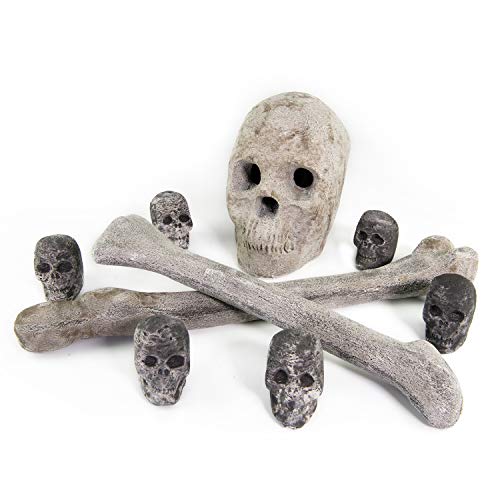 This Skulls and Bones Bundle comes with a large skull, crossbones, and six mini skulls.

The bundle will work in both a fire pit or fireplace. The manufacturer states that the skull and bones will not release toxins. This makes them safe for all occasions including indoor use.

The ceramic material can handle temperatures up to 3,000°F. The average fire pit or fireplace reaches less than 2.000°F at maximum. Essentially, there is little worry about extreme temperatures damaging the skulls and bones. You can reuse the decor year after year without worry of fire damage.

Lastly, the large skull has the ability to release flames through the nose and eye holes. This creates a cool effect and makes the skull appear more realistic.

This 6″ x 9″ x 7″ skull will add a creepy realistic atmosphere to almost any fire pit. The dimensions are eerily similar to an adult human skull.

The skull can be used in both a wood or gas fireplaces. Similar to the skulls and bones featured above, this skull will not be damaged by the heat. However, the skull will collect soot with use, which will change its color. Additionally, the ceramic material is non-toxic.

We recommend placing the skull directly over the flames to allow the interior to take on a mesmerizing glow.

These unique skulls are made out of recycled coffee grounds, recycled/reclaimed wood shavings, Paraffin wax, and agricultural fibers.

Additionally, the skulls contain cupric sulfate to enhance the color. The manufacturer states that the color enhancer will produce light blue, purple, and green. They will provide up to two hours of fire pit fun.

We love this skull for the detail put into crafting it. We particularly appreciate the anatomical lines etched on its surface to create realism. The realism  is enhanced by the skull’s dimensions being similar to to a real adult.

The skull is available in three colors: white, black, and brown. However, as the skull is used over time, the appearance will be the same no matter the color you select due to soot build up.

The skull can be placed in a wood or gas fire. The ceramic material allows this skull to be used time after time without worry of damage.