How Was The Paper Plate Used?

Before we get into the type of paper plates that can be compost, let’s talk about why it it matters how they were used.

Similar to paper towels, you should not compost any paper plate that had a material on its surface that should not be composted.

For example, a paper plate soaked in cooking oil or one that was used to catch a car oil leak should not be composted. Both cooking oil and the more obvious one, car oil, are two things that don’t belong in the compost bin even if they are an indirect source being composted.

Read this Environmental Protection Agency article if you want to learn more about items that can and cannot be composted. Many items are common sense, but if you are new to composting, there might be a couple of surprises on the list.

Some paper plates are poly-coated. This means they are made with a plastic layer on them to help protect against grease or liquids from seeping through the plate. While a poly-coated plate might protect your pants from getting soiled at a picnic, the coating makes it unsuitable to home compost this type of paper plate.

The plastic in a poly-coated plate is not biodegradable. It leaves plastic residue behind when the compost material is ready to be used. This plastic that lingers in the soil is believed to impact the organism in many biological communities. As eco-cycle advises, it is better to toss poly-coated plates in the trash than harm the soil through composting them.

The good news is that the standard uncoated white paper plates can be composted if they are certified as compostable. An example is Chinet paper plates. The company specifically states on their website that the plates will break down in home and commercial compost since they are made completely of recycled FDA approved paper fibers.

Additionally, Amazon sells a variety of compostable plates that don’t sacrifice their strength for their eco-friendliness. An example of a popular 100% compostable paper plate is the Stack Man shown below (click the image for more details on Amazon). It is made all from sugarcane fiber without the use of trees or plastics in its material. 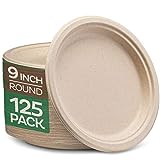 Generally, you cannot recycle paper plates because food soils them. The paper cannot separated from things like food oils and grease stains when being processed during recycling.

A clean (non-coated) paper plate can typically be recycled. However, recycling clean poly-coated paper plates will depend on if your city’s recycling program will allow it.

Since most paper plates are used for food and are containmenanted for recycling purposes, you will commonly either throw them in the trash or compost the plate (if an acceptable plate for composting).

How Much Does a Snow Blower Weigh?
Best Garden Gnomes
Do Deer Eat Hostas?
Japanese Maples: Common Questions Answered
How Many Bags of Mulch in a Yard?
The Best Snow Pushers for Clearing Driveways and Sidewalks
The 8 Best Axes for Kindling: A Buying Guide
Do Deer Eat Pumpkins?