Big dogs, kids playing in the yard, and routine entertaining are just some of things that often contribute to high traffic on a lawn. Along with this high traffic comes the potential for damage. Many of you reading this article likely currently have this lawn damage or have had it in the past.

A question many homeowners have when it comes to a high traffic lawn is if the the type of grass matters. In other words, is there a best high traffic grass that can be used to eliminate or minimize traffic damage?

The answer is yes. Let’s take a look at the top choices for both cool-season and warm-season lawns.

Here are the types of grass to consider for high traffic if you live in a cool-season grass zone. Cool-season grass is what is planted in the northern states and sometimes in the transition zone in the middle of the country. See this map if you are unsure of the grass zone you are in.

Kentucky Bluegrass – This is a favorite for sports fields including many Major League Baseballs stadiums such as Yankee Stadium and Fenway Park. Its growth is relatively dense, which allows it to stand up to a high level of foot traffic at home or on the field.

Additionally, it is a spreading grass through its growth of rhizomes. These rhizomes often fill in areas where there is no grass and have the ability to revive a lawn from the severe damage. Check out these pictures from Iowa State University Extension that show the ability of the Kentucky bluegrass underground rhizome system to significantly recover a lawn that had been killed on the surface.

This is due to its shallow root system which does not allow it to reach nutrients deep into soil like other cool-season grasses. Expect the lawn to quickly go dormant with the lack of water during the hot summer months. Furthermore, this type of grass is known for not tolerating shade. Be prepared to plant it in full sun areas.

Look for a Kentucky bluegrass variety that is known to stand up to a lot of food traffic such as Midnight Kentucky Bluegrass.

Turf-Type Tall Fescue – This type of grass requires much less maintenance compared to Kentucky bluegrass. It has the best drought and traffic tolerance out of all the cool-season grasses, according to Iowa State University Extension.

If you are not big on watering, tall fescue is for you with its ability to stay green much longer without water in comparison to perennial ryegrass and Kentucky bluegrass. Its roots run deep which assists in helping it remain green and healthy.

The biggest disadvantage of this grass is that it is often cited as not being the best at coping with insects and disease. This this especially true for prolonged wet periods.

Moreover, tall fescue often has a thicker blade which may not be desirable in appearance for some people. However, varieties have been recently introduced that are more appealing with thinner blades.

Perennial Ryegrass – Here is another grass that is used for athletic fields and golf courses, at least partly because of its ability to be extremely wear resistant. The University of California states that it has the highest wear-tolerance of the cool-season grasses.

This attractive thin blade grass thrives in areas where winters are not extremely harsh and summers are moderate. A major advantage of perennial ryegrass is its ability to quickly germinate. Assuming proper growing conditions, this type of grass can germinate within less than one week.

The downside of perennial ryegrass is that it may not fair well through tough winter weather or other stresses. It is not uncommon for people to have to overseed each season in damage areas since the grass lacks the ability to spread like Kentucky bluegrass.

A place like the Pacific Northwest is ideal for this grass type where winter damage is not typically a concern and where summers are not outrageously hot.

Mixes – There are a few decent grass seed mixes of two or more of the above mentioned grasses. Mixes can be a good option for high traffic areas to help minimize weaknesses that a single type of grass might have on its own.

An example of a solid heavy traffic grass seed mix is the Jonathan Green seed shown below. It is a mix of tall fescue and perennial ryegrass. 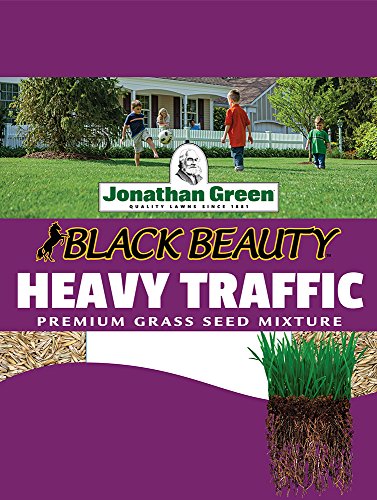 Bermudagrass – This grass is able to spread through stolons and rhizomes. If you have damage areas from heavy traffic, bermudagrass can naturally fill in these areas with a reasonable amount of damage. It is a common grass for athletic fields in the south and southwest where it thrives in full sun and the heat. Watering and fertilizer is only moderately required.

When temperatures cool, bermudagrass will brown. There are certain circumstance where traffic on this grass can damage it during winter months. The University of Kentucky states that damage can occur when the lawn soil is saturated, usually during late fall and winter. Walking on this saturated grass can cause the bermudagrass to pull up out of the soil and, of course, kill it. Heavy traffic on a frozen bermuda lawn can also cause some problems. These traffic problems can be reduced by establishing a high-quality bermudagrass lawn.

Zoysiagrass – Similar to bermuda, zoysia spreads by stolons and rhizomes. This helps the lawn recuperate from traffic damage. Zoysia grows dense and does not require an excessive amount of fertilizer or water.

It tolerates shade much better than than the sun loving bermudagrass. However, it will need at minimum six hours of sunlight to be at its best. A thinning zoysia lawn that is shaded is a sign that it is not receiving enough sunlight.

Heading into the winter months, it is not uncommon for zoysia to lose its green and brown during dormancy. This brown color sticks around until the warm days of spring reemerge.