Irish Spring is my go-to bar soap when it is on sale at Costco. I love the smell and it gets me clean. It is difficult to ask for more out of a bar of soap considering my simple needs.

While Irish Spring’s primary purpose is clearly to help wash the body clean, there are many people out there who use the soap for alternative purposes. One of those purposes, by some, is to deter mice. The big question is (at least for this article), does Irish Spring really keep mice away mice?

The common theory seems to be that Irish Spring is so powerful smelling right out of the box that it must be effective at driving away mice. Unfortunately, Irish Spring does not keep mice away based on the evidence presented below. In fact, there is evidence that mice will actually eat the soap!

While I would suspect that soap is not a top food choice for mice, it appears to be something that they will not shy away from smelling or nibbling at when they happen to come in contact with it.

The below video via Shawn Woods shows just how ineffective Irish Spring is at deterring mice and rats. The footage shows the mouse lingering around the soap for some time and later in the video a rat actual gnaws at the bar, leaving a few bite marks. Check out Shawn’s YouTube channel for an excellent selection of videos of mouse traps that genuinely do work.

Here is another video below showing a mouse hauling away pieces of soap. At the end of the video, it eats the soap in front of the camera because the bar has been tethered to an off-camera object to prevent the mouse from running off with it. The soap does not appear to be Irish Spring, but the video provides further evidence that soap is a terrible mouse deterrent.

After viewing the videos, I looked for some academic literature to help support or disapprove this footage. The University of Nebraska-Lincoln states the following regarding mice and soap,

Lastly, Michael Breshears at the Sentinel Source recently wrote an article titled “Got a Mouse in Your House?“. It is an interest read, if you have time, about his experience dealing with mice around his house. In this article, he states that the rodents gained access to his bathroom vanity as detected by their notorious droppings left behind. As with many vanities around the world, his contained soap bars for apparent future use. The mice ended up destroying the soap packaging and eventually gnawed on the bar of soap once they gained access to it. Needless to say, the soap ended up in the trash.

Despite the evidence that Irish Spring does not keep mice away, there are people who insist that it works. There is a theory that you need to shred the soap for it to be effective. There is also a believe that only Original Irish Spring will work and not products such as Irish Spring with Aloe or Icy Blast Irish Spring. I have also heard that certain types of mice are driven away by the soap whereas others see it as a snack.

At this time, there has not been extensive studies done on mice and soap to definitively approve or disapprove some of the theories out there. If you know of any, let us know. However, given the evidence presented above, Irish Spring appears to be a terrible product for deterring mice. This is especially true since there is evidence that mice are not only attracted to the soap, but potentially may gnaw or eat it as well.

I’ll keep my Irish Spring hidden away if the mice start trying to move in and look for a deterrent that has been proven to work. I certainly won’t being using Irish Spring to eliminate an infestation or even a single mouse.

Check out our article on titled What Kills Rats Instantly? for ideas on eliminating both mice and rats. However, a snap trap, such as the one below, is still one of the most efficient and economical options for killing mice. 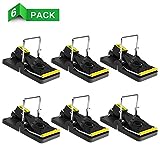 If you have deer that frequent your yard, you likely have received some plant damage…

Deer will eat just about anything edible if they are hungry enough. However, they do…

Can You Compost Paper Towels?

If your household is anything like mine, you probably go through an enormous amount…